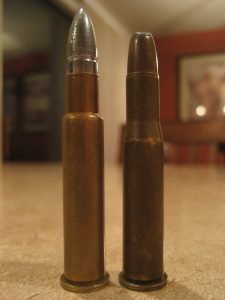 In 1895 Winchester launched the first version of the .30 Smokeless cartridge. It was made to be used in Winchester’s Model 1894 carbine and rifle. The rifle was a lever action repeating rifle. The ammo was also called the .30 Winchester Center Fire or .30 WCF. Winchester designed the .30 WCF as the first small-bore sporting cartridge created for smokeless powder in the U.S. It became the most popular hunting rifle in the history of firearms.

Shooters used the round in Marlin’s Model 1893 rifle. The company named it the .30-30 Smokeless or just .30-30 ammunition. The company added the second “.30” in reference to the standard load of 30 grains (1.9 g) of smokeless powder. Marlin wanted to launch the cartridge as part of its own line. They renamed the cartridge to avoid giving credit to Winchester, the company’s rival. The Union Metallic Cartridge Co. changed the name of its .30-30, as well.

A .30-30 cartridge is usually loaded with bullets weighing 150-170 grains (9.7–11.0 g), however, lighter loads are available. The cartridges can use up to 180 gr (11.7 g), but length restrictions of lever-action rifles commonly chambered for the ammo round limit their abilities.

Shooters call the .30-30 an entry-level gun for hunters. It has a light recoil which is easier to handle for novice shooters. It has an average range of 200 yards. The round is good for hunting medium-sized game like deer as well as black bear. Hunters report using the round on larger game such as caribou, moose and pronghorns. Seasoned hunters argue the effectiveness of the round on moose, especially at longer distances. Hunters use .30-30 ammunition for hunting moose in Newfoundland, Canada, but it is not recommended. It is not legal for moose hunting in Sweden, Norway or Finland because it does not meet the minimum energy requirements for the large game.

Firearms manufacturers sell guns that are far superior to the .30-30 when it comes to technological advances. However, many hunters return to their .30-30 rifles on a regular basis. Some hunters use the guns for a sense of nostalgia. Perhaps the gun was handed down through generation to generation, carrying with it decades of history, as well as memories. The gun might have been used to shoot for the first time or take down a prize target.

Some use the weapon because it is easier to shoot than those with all the extra bells and whistles. People like what they know. Additionally, a .30-30 rifle carries less weight which makes it easier to trek through woods and dense brush while tracking a target. Hunters get worn out by climbing hills (especially in the snow) with the excess weight of other equipment. In the end, it is the bullet and the aim that matters the most.