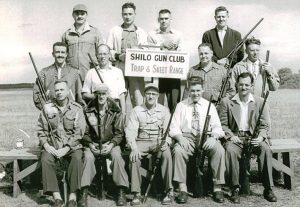 Sport shooting has changed a great deal since its inception as technology has advanced. Along with those advancements came new sports and competitions, many of which culminate at the Olympic Games. As of 2017, 9.38 million Americans aged six years and older participate in some form of sports shooting activity. But where did it all begin?

As you may have guessed, early sports shooting revolved around rifles. The first recorded competition, most likely using matchlocks, was in 1477 in Eichstäat, Bavaria. In it competitors shot at targets at a 200 meters (200 yards) distance.

A 1504 painting depicts a Swiss shooting set up that appears modern. Competitors fired at targets from enclosed shooting booths. Target markers measured their shots and reported each value to the judges.

The 16th century saw leaps and bounds in the European sports shooting arena. Germany appears to have had an unusual purpose for target shooting. Many museums display wooden targets that were crafted as part of wedding celebrations. Guests would shoot at the targets. At the end of the event, they gave the riddled targets as gifts to the bride and groom.

Russia officially joined the target shooting world in 1737, when Empress Anna opened a target shooting range at the royal court. Competitors shot at live birds and the best of the best received gold and diamond studded cups. The sport caught on and in 1806, Russian military officers founded the Society of Shooting Amateurs, a group whose interests lay in handguns.  Societies began to blossom in St. Petersburg including the Riga Shooting Society and the St. Petersburg Society of Salon Shooting. The first official set of rifle competition rules were established in 1897 by the Imperial Society of Reglemented Hunting.

By the mid-19th century, sport shooting had a strong foothold on both sides of the pond. European countries had begun having fierce competitions on a regular basis. England was so devoted to the study and development of arms that the National Rifle Association was formed in 1860. Queen Victoria fired the inaugural shot at the first meeting of the association. 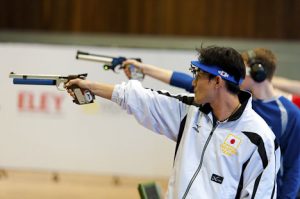 The mid-18th century also saw target shooting thrive in the New World. Everyone from colonists to frontiersmen participated in the sport. Every settlement had some form of shooting match with as many as a hundred marksmen in attendance.

By 1830, shooting became organized with clubs dotting the map. The National Rifle Club, a benchmark society, was formed in 1850. The Civil War had a hand in propelling sport shooting to the forefront when National Guard Officers formed the National Rifle Association in 1871 to improve military marksmanship and safety.

In 1896, the cultures came together when sport shooting was added to the Olympic Games.  Five events featured the sport. As technology grew, so did the number and variety of events during the Games. Currently, there are fifteen events for men and women, utilizing rifles, shotguns, and pistols.