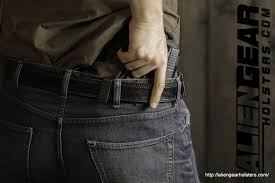 Gun owners will rarely agree on the best caliber to use for concealed carry guns. Obviously, the type of gun will dictate, to a degree, what type of ammunition you will use. The type of weapon and ammunition will also depend on your level of experience.

Novice shooters should complete a training course before shooting or buying any gun or ammunition. Range practice will guide you to choose the right gun and ammo for your unique situation. Instructors can help you decide which ammunition is comfortable for you to shoot, given power and recoil. The instructor will also help you to decide which type of ammo would work best in situations you may encounter. Most people carry concealed for personal protection. You should ask yourself why you want to carry concealed. The answers to those questions will help you choose between a .22, 9mm, .380, .357 or a many other choices.

The .22LR is a light round that many argue isn’t powerful enough for concealed carry. However, that’s not always true, especially if your aim is to scare off an intruder.

Munitions makers designed the .357 Magnum by adding more powder into the case of a .38 caliber. Law enforcement liked the round and it became a go-to for defensive shooting.

The .380 ACP is a shorter version of a 9mm round. The ammo has light recoil and sufficient stopping power for this purpose.

The .40 S&W was created by shortening a 10mm cartridge as well as reducing the powder charge. The round is larger than a 9mm, but it can fit in a pistol designed for 9mm. The round, a good choice for self-defense and concealed carry, remains a popular choice for law enforcement and civilians.

Gun enthusiasts love the .45 ACP. Its incredible stopping power has made it popular with the military, law enforcement and those that want to carry a large caliber for protection. The only downside is it muzzle flash and recoil, which are still manageable for the right user.

The 9mm Parabellum is the most used ammunition cartridge in the world. Police and military use it for most pistol applications. It has good stopping power and is readily available from most manufacturers.

Shooters should educate themselves not only on the caliber of a round but also the various types of ammunition that are made for each. These include full metal jacket, hollowpoint, and soft hollowpoint, among others. You must discover which caliber is best suited for your use, is the most practical and most affordable. Once you do that, you will enjoy your weapon for many years to come. 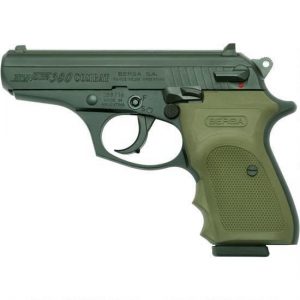 People who carry concealed for self-defense often choose larger calibers for their stopping power. The .380 Automatic Colt Pistol (ACP) remains one of the most popular rounds on the market. Shooters prefer the round because it is lightweight and easy to carry with minimal recoil and muzzle blast. Police officers often carry a .380 as a backup weapon. Hobbyists and competition shooters choose the ammo for backyard shooting, competition and plinking.

John Moses Browning created .380 ammunition for the Colt Model 1908 Pocket Pistol in 1908. Browning designed the ammo after the .38 Automatic Colt Pistol (ACP) cartridge, which was made for blowback pistols. The military used .380 ACP ammo until it was replaced with the 9mm.

In 1912, .380 ACP ammo was introduced in Belgium, where it was named the “9mm Browning Short.” Military forces used the round throughout World War II until many replaced it with the more popular 9mm cartridge.

The .380 Auto for Self-Defense

People looking for a self-defense weapon may choose the .380 ACP for its accuracy. The round has a moderate recoil and muzzle blast which works well for novice shooters. The round feeds easily and the guns chambered for this round are dependable. The ammunition is better than the .32 Auto, especially when it comes to stopping power. As a result, the .380 ACP has become the standard minimum chambering for law enforcement, military and self-defense use.

The popularization of the 9mm caused a decrease in sales for the .380 ACP until the mid-2000s, when the demand increased for lightweight pistols suitable for carrying concealed. Manufacturers have responded to the demand for weapons chambered in .380 ACP and have also begun to mass produce the ammo to be sold in bulk. The mass production allows consumers to buy .380 rounds for less money at retail sites as well as through online markets.

The stopping power of .380  ammo is sufficient to stop a threat.  Some experts dismiss the round because it is smaller and less effective than larger handgun calibers. For example, the 9mm has more firepower, but the performance isn’t much different. The .380 round performs like a .45 cartridge rather than the .32 ACP, which is closer to its size.

While the cartridge may be weaker than larger calibers, the lower recoil is a benefit to novice users since the gun is easier to fire. The shooter also has less recovery time and can fire faster, which means a great deal when the shooter is acquiring a target. Manufacturers continue to chamber handguns for the .380 ACP, including subcompact models that are ideal for concealed carry. 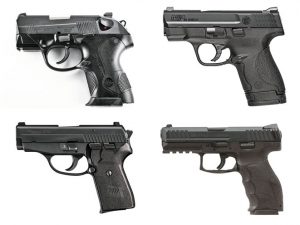 The .40 Cal S&W is a rimless pistol ammunition created for the Federal Bureau of Investigation by firearms manufacturers Smith & Wesson and Winchester. The .40 S&W (10x22mm) was developed from scratch after the failed FBI shootout in Miami in 1986. The confrontation left two FBI agents dead, with five wounded. The agents fatally wounded the two criminals.

The FBI commissioned Smith & Wesson and Winchester to create an ammo that could be retrofitted into their existing 9mm semi-automatic handguns. S&W and Winchester based the new ammunition on 9mm and .45 ACP cartridges. The new cartridge would function as a medium velocity round mimicking the accuracy of a 9mm, but using the parameters of a 10mm load.

The team satisfied FBI requirements. The new medium ground ammo could be used by agents in a standard issue semi-automatic pistol. The FBI believed that the new standard issue would prevent another disaster like the one they faced in Miami.

The FBI determined that the standard issue .38 Special revolvers had lost their effectiveness. They switched to 10mm cartridge and the S&W 1076 Auto shortly before the Miami shootout. The FBI determined the agents’ deaths were caused by lack of ammunition, heavy recoil, and the difficulty of reloading quickly in the field. It was imperative to find a new, more effective ammo to prevent future debacles.

S&W and Winchester completed the development of .40 Cal bullets in 1990, along with the Smith & Wesson Model 4006 pistol, six months after receiving the request from the FBI. The result of the collaboration was an ammunition with the stopping power of a .45 ACP round, with the ease of use of a 9mm.

The FBI adopted the .40 Cal S&W. Law enforcement agencies around the country quickly followed suit. The United States Coast Guard and police forces in Canada and Australia also adopted the .40 S&W and still use it today.

The middle ground ammunition has adequate stopping power for self-defense and concealed carry. The recoil is manageable for novice and shooters with a smaller frame.

Based on ideal terminal ballistic performance testing in the 1980s and 1990s, the .40 S&W was touted as “the ideal cartridge for personal defense and law enforcement”. The .40 Cal S&W is almost identical to the ballistics of the .38-40 Winchester introduced in 1874, with the same bullet diameter and weight, as well as having similar muzzle velocities.

The .40 S&W is attractive to civilians due to its ease of use and light recoil. People seeking ammo for self-defense situations demand accuracy and stopping power. The .40 cal meets those requirements. Consumers have a variety of options for bullet weight and design.

Civilians appreciate the same features coveted by law enforcement, including magazine capacity, muzzle energy, and light recoil. The round is accurate and easy to manage, making it ideal for concealed carry and self-defense. While it isn’t the most popular round on the market, most new firearms offer compact and subcompact models chambered for the .40 Cal.