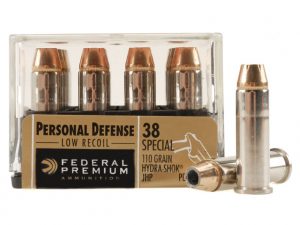 Smith & Wesson Introduced .38 Special ammo in 1898. S&W designed the centerfire cartridge as an alternative to its .38 Long Colt. The military had used the Long Colt as a service cartridge, but complained that it lacked stopping power in battle. Law enforcement officers from the 1920s up until 1990s, used the .38 Special as a standard issue service cartridge. WWI soldiers carried the round into combat. The revolvers and ammunition faded from every day use, but remain the symbol of the law.

Shooters buy .38 Special rounds frequently for competition shooting, pest control, target practice, and self-defense. Most opt for a full metal jacket round for plinking or range training while jacketed hollow point rounds are chosen for self-defense and personal protection.

The U.S. Army used the .38 Long Colt as a standard issue sidearm from 1892 – 1911. However, as the M1892 progressed, the military said that the round was no longer effective. They complained that it performed poorly during the Spanish-American War as well as the Philippine Insurrection. Soldiers said the ammo wasn’t accurate, nor did it have adequate stopping power.

Smith & Wesson produced the .38 Special Military and Police revolver in 1902, which quickly gained recognition among troops and civilians.

In 1909, Colt also introduced a revolver chambered in .38 Special ammo. The gun compared to the .38 S&W Special, however, Colt’s firearm had the flat-pointed bullet design.

John Henry Fitzgerald, an employee at Colt, designed the “Fitz Special” in the mid-1920s. Fitzgerald’s snubnosed revolver was a pared down version of the .38 Special Police Positive Special. He believed that reducing the barrel size would make it easier for law enforcement officers to carry concealed. He shortened the ejector rod and removed the front of the trigger guard. Fitzgerald shortened the ejector rod, removed the trigger guard, and changed out the hammer spur so it could be a faster draw. Colt made some alterations to the design of the Fitz Special and rebranded it as the Colt Detective Special. Since its release in 1927, the six-shot revolver has been called the most iconic snubnosed revolver in firearms history.

People choose the .38 Special as a standard for self-defense purposes. Police officers carried lead-nosed rounds, dubbing the ammo “.38 Special Police.” It is known for deep penetration and causing extreme damage to its target. Shooters choose the .38 Special for concealed carry when use with snubnose revolvers. The small size is easy to conceal in a purse, jacket, or in an ankle holster.

Competition and target shooters purchase full metal jacket bullets as a preferred round, followed by hollow point. Likewise, when range training, the FMJ is the preferred choice as it doesn’t expand when impacting a soft target. Target shooters choose the ammo for its economical price and aren’t dissuaded by the less than perfect performance.

Experts train novice shooters with .38 Special ammo because of the ease of use, low noise, and low recoil.